(In early April a dance show celebrating womanhood and only featuring female dancers was scheduled to be performed in Stockholm. It was cancelled at the very last minute because the venue deemed one piece a “security risk”. The piece was Mari Carrasco’s Bartolomeo, danced to music containing verses from the Koran. It had received criticism by one (!) person on Facebook (with several “likes” from friends…) which was enough to cancel the whole show. This interview took place a couple of weeks before that incident.)

“When you were little, dancing in front of the mirror, everything was allowed and you didn’t know if it was good or bad or what you could do or couldn’t do. It was uncontrolled, uninhibited, like an earthquake in the body. In my world contemporary is the style in which you can do anything and that’s why I feel I can do anything.”

The words of choreographer Mari Carrasco are simple and easy for any artist to relate to, but maybe not as easy to live by. When art doesn’t fit neatly into the categories that others have created for it, is not as challenging as one person would’ve hoped or is too conceptual to sell on the market, the artist is left to face doubt on her own.

“Bartolomeo was mostly a reaction to things. It started with my role, what I felt as a dancer and a choreographer, not wanting to be pigeonholed. Our role in society. Our roles as women. A lot of feelings, frustration, a lot of anger. You have twenty jobs here and there and you don’t have time to do everything you should. That frustration.”

It was also a reaction to Carrasco’s earlier piece Nest, a contemporary take on choreographer Mats Ek’s version of the ballet Giselle. While Bartolomeo had been all about “feelings, feelings, feelings” and had let the dancers be individuals, Nest was set to the industrial sounds of techno music and had the dancer’s perform intense monotonous movements, almost like machines, not displaying any emotions at all.

“We were lost and couldn’t see each other, that’s why we were wearing hoods. When we took off our hoods it was a liberation and we could see each other and it was okay to be crazy in this world. I guess it was a reference to us being very closed as people in Sweden.”

Both pieces were performed by Carrasco’s own dance company, simply named Carrasco Co, which she started in 2008 while still in school. The company consists of Rita Lemivaara and Elin Hallgren, who where the first ones to join, and Bianca Traum, Lisa Gäfvert and Maria Ulriksson. All five are close friends of Carrasco and have remained the core of the all-female company.

“As a female dancer it’s still important to look a certain way, thin and slender, and I wanted to show alternative role models. I wanted to show that women can be just as strong and powerful dancers as men. Some big names have said that I should include men in the company to succeed. Maybe someday, but not now. I want strong women on stage.”

A relatively young choreographer, Carrasco is aware that some might consider her too young and lacking enough experience, but she hasn’t let convention hold her back yet. Although Carrasco Co is a collaboration between a choreographer and her dancers it’s clear that in the end it’s Mari Carrasco’s visions that are coming to life on stage.

“Most of my ideas come from images in my head. I have to process the images for awhile and then I try it on them. If somebody doesn’t feel comfortable moving a certain way what comes out of that can be great too. It becomes another expression. We don’t talk that much during rehearsals, we mostly communicate through the bodies. I show, they do and then we can talk afterwards.” 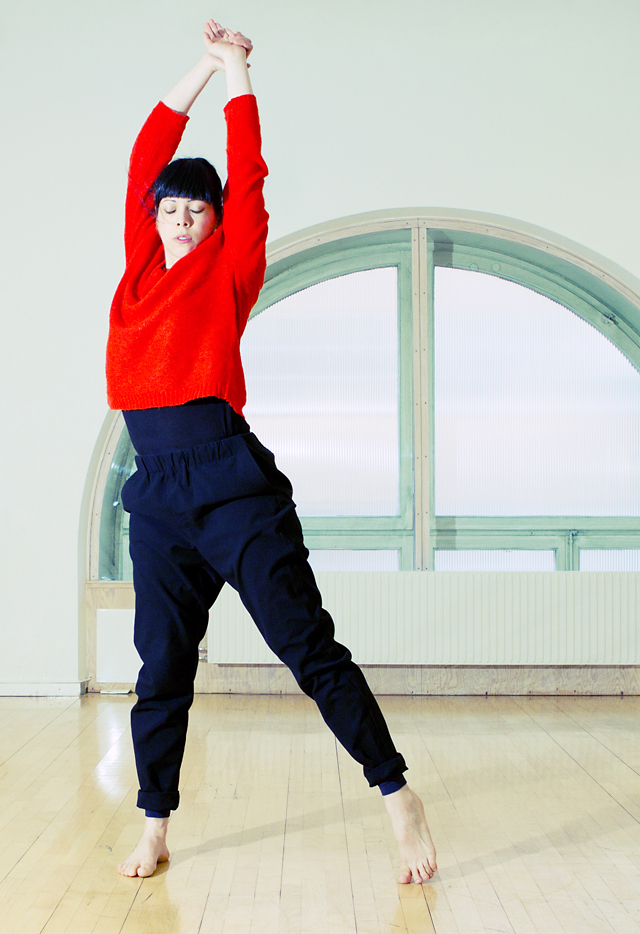 Though Carrasco is mainly trained as a contemporary dancer, her work is heavily influenced by other styles she’s trained in such as jazz, street dance and the energetic disco freestyle. Disco freestyle might seem an odd influence in the mix, but many jazz dancers have taken their first steps in this style, even though few would use it as openly as Carrasco does.

“I grew up with it. I went to a disco freestyle school and began competing immediately. It was one minute of techno music and then you just had to go, go, go, then you went off and then you went back again. For some reason I loved that.”

Mixing as she pleases and then making it her own, it’s this kind of disregard for what contemporary dance is supposed to look like that has given Carrasco Co both fans and critics. The critics, mostly other dancers, dismiss them as too commercial, performing superficial movements “like a football team”. People who don’t usually go to see dance, and especially not contemporary, are instead pleasantly surprised because it’s not what they thought contemporary looked like.

“I’m trying to make contemporary a bit more accessible for ordinary people. In Sweden contemporary is often treated the same way a scientist treats his experiments. It’s supposed to be very intellectual. That’s great, that part of me also exists, but it can also just be entertainment, it doesn’t have to be deep or weird. I think it becomes boring when it’s only meant to provoke.”

While Carrasco Co are receiving a lot of well-deserved attention, Carrasco can still make a list of things she hopes for in the future. To have the opportunity to choreograph a piece closer to 45 minutes instead of 20, to be able to work full-time with the company instead of squeezing in rehearsal time during lunch breaks, to get paid and get grants, to perform on the biggest stage in Sweden and tour Europe, to be a “real” company.

Mari Carrasco is currently teaching at different dance schools around Stockholm and will finally perform Bartolomeo with Carrasco Co at Kulturhuset in early May. Carrasco and some friends once dressed up as Teletubbies and performed a really underrated routine – she’s the one in green.

OPOLOPO’S LO-, HI- & SCI-FI MIX for WE ARE REPLICANTS